...overjoyed at the fact that I am now in my twelfth year of remission, have a gorgeous wife and two perfect children, and have the job that I'd always dreamed of. 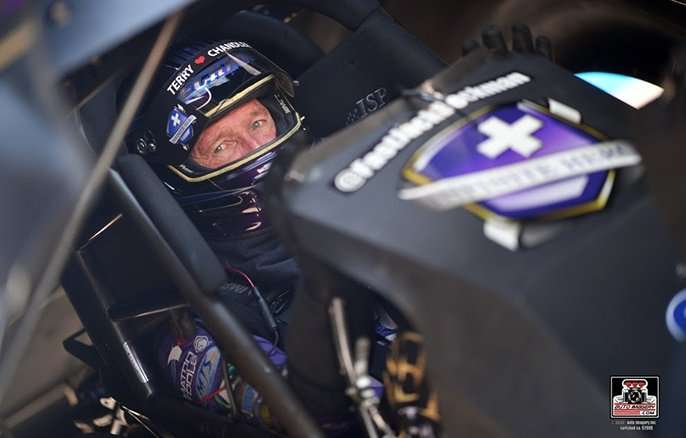 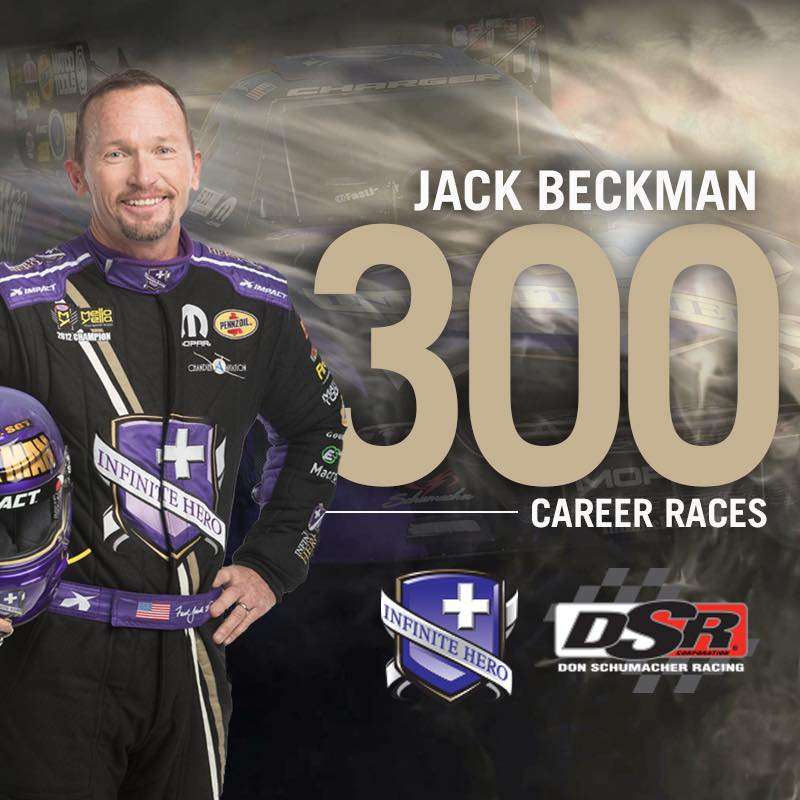 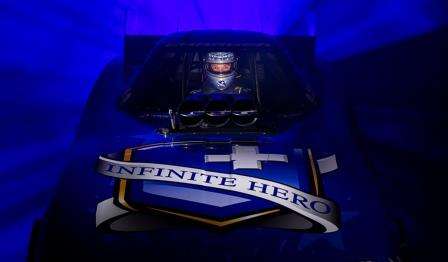 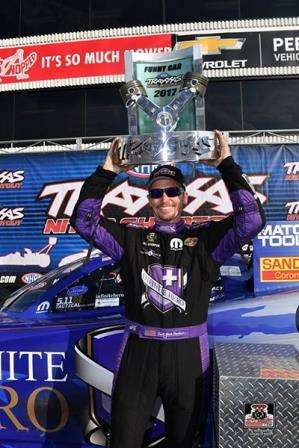 Jack Beckman, the 50-year-old driver of Terry Chandler’s Infinite Hero Dodge Charger R/T Funny Car for Don Schumacher Racing, began to pursue his drag racing passion in 1998 when he became a driving instructor for Frank Hawley’s NHRA Drag Racing School and went on to help more than 7,000 students earn their NHRA competition racing licenses.
He made his debut as a part-time Top Fuel dragster driver in 2005 after a winning battle against non-Hodgkin’s Lymphoma.

The California native who lives in Norco, Calif., with his wife Jenna and two children, joined DSR in 2006 and won the 2012 NHRA Funny Car world championship, nine years after he became the Super Comp world champion in NHRA Sportsman competition.

Beyond the hard work produced by his team, Jack can be proud of two special campaigns he spearheaded at NHRA events.

As a cancer survivor, Jack has served as a national spokesman for Amgen’s Chemotherapy: Myths or Facts campaign to help others suffering from cancer and their families.

Through sponsorship from Rodger and Karen Comstock’s Mail Terminal Services, Jack’s Dodge Charger R/T carried the message of Wounded Warriors and encouraged NHRA fans to complete a special postcard provided by MTS to send a special message to a soldier injured in Afghanistan or Iraq.

“Both of these programs are very special to me as a cancer survivor and former U.S. Air Force Airman,” said Jack, who made the transition from a self-proclaimed high school dropout to an honorably discharged sergeant four years later at age 21.

His passion for drag racing was so strong that he left a secure job of 10 years as an elevator technician in 1998 to become an instructor with Frank Hawley’s Drag Racing School at Pomona, Calif.

Jack was optimistic about the 2012 season after crew chief Rahn Tobler and crew led him to a second-place finish in the 2011 NHRA championship standings with three event titles and one No. 1 qualifying position.

After the fourth event of the 2012 Mello Yello Drag season, Jack and his Valvoline/Schumacher Electric team were ranked third in points but at the end of that race team owner Don Schumacher opted to move Tobler and Jack’s crew, to teammate Capps after the NAPA Funny Car didn’t qualify for that event at Las Vegas.

The following week, Jack had a new crew chief.

At the next event, the team lost in the second round of eliminations and the following event failed to quality. The third time out, Jack lost in the first round near Atlanta and dropped to sixth in points.

But two weeks later near Topeka, Kan., the “new” team won their first NHRA national event title together and the march to the championship began.

Over the last 16 NHRA events of 2012, Jack won three race titles and qualified No. 1 four times.

And no event was bigger for the team than the one on Oct. 5-8 at Maple Grove Raceway near Reading, Pa., where the team set NHRA national records for elapsed time (3.986 seconds) and speed (320.58 mph) and advanced to the semifinals. The E.T. record earned a 20-point bonus that was pivotal in his championship race with Capps.

In the season-finale at Pomona, Jack had to keep pace with Capps and when the NAPA car lost in the semifinal round the championship went to Jack and his team by two points, in the closest finish in funny car history.

Jack’s father, Bob, and mother, JoAnne, were “car people” who introduced him to the mechanical aspects of street cars. By the time Jack was 17, he had owned several cars that contributed to honing his mechanical skills.

Jack notes that it was his Uncle John Jorgenson who convinced his parents to let him take Jack, who was 7, and his brother to Orange County International Raceway for their first drag race.

“The first time I saw those cars, felt those cars, smelled those cars, listened to them and watched them, everything about them was absolutely thrilling,” Jack recalls. “And from that day I knew that I wanted to drag race.”

His father, who goes by “Slow Bob”, to contrast his son’s moniker of “Fast Jack”  was a hot-rodder. Bob didn’t race but passed on mechanical skills and sold his son a 1968 El Camino that he still owns. Once Jack passed his driving test in the El Camino on his 16th birthday, he started tinkering with its intake manifold, camshaft and other components.

FROM DROPOUT TO SERGEANT

Jack admits to losing interest in high school and left when he was 17 and began working full time in a tool warehouse. He knew he needed a new direction in life. After earning his GED and passing the Armed Services test, he enlisted in the U.S. Air Force before he turned 18. “That was likely the best decision I ever made,” he says. “It gave me direction, focus, job skills and a renewed sense of self-worth.”

He was honorably discharged as a sergeant at age 21.

Soon after returning home to Southern California, he joined the Funny Car team owned by Tim Grose where he worked on the bottom of the engine at races. But after the team lost sponsorship funding, Jack took a job in 1988 as an elevator technician for Westinghouse in Southern California. During that part of his life he began competing regularly in NHRA Sportsman categories.

Drag racing remained his passion and doing it full time was a dream. He quit the elevator company after 10 years to become an instructor at the Frank Hawley Drag Racing School. Among the 7,000 or more students he taught, including several of whom he has raced including John Force’s daughters, were some who continue to play major roles in his life.

FROM CHAMP TO CANCER PATIENT

In 2003, Jack drove his 160-mph dragster to the NHRA Super Comp world championship. Life was racing along right on track.

But the next year he began experiencing health problems that were ultimately diagnosed as high-grade level 3B lymphoma, a cancer that had invaded his body from hip to neck. He underwent six months of chemotherapy treatments, but continued to teach at Hawley’s school and race as an amateur.

Throughout the ordeal, Jack was inspired by an outpouring of support from family, friends and fellow racers.

“People I barely knew would come up to me at the races and tell me they were thinking of me,” he says. “I can’t describe what that meant to me. It’s also nice not having to die to know how much people care about you.”

He had his last chemotherapy treatment on October 25, 2004, and remains in remission. As he continued to regain strength, he drove 12 races in 2005 in a Top Fuel Dragster owned by Dexter Tuttle and partially sponsored by MTS.

His journey to winning the 2012 NHRA Funny Car world champion began in 1986 when he made his first pass down a dragstrip in his El Camino in a time of 15.06 seconds and 90 mph when he was 19 and stationed at Clovis, N.M.

When he was discharged four years later, he moved up to NHRA bracket racing.

“First, it was all about the time slip. Then I realized you could win a trophy, and that’s all that mattered. When I realized I could win money then my emphasis shifted to that.” Owning two NHRA world championships also is a nice payoff.

And helping people is a longer lasting prize.

Jack and Jenna, drag racers mind, body and soul, were married at the NHRA Museum in Pomona, California. This wedding photo was taken at the starting line of the Pomona race track.

“You think about this, and you dream about this,” said Beckman, a cancer survivor. “It’s going to take me a while to wrap my head around this.” (USA Today) 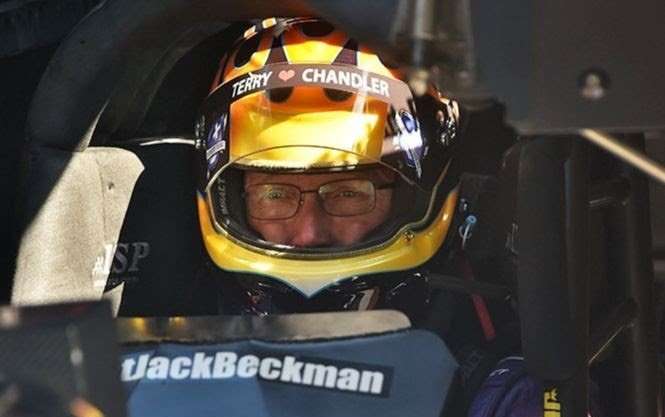 The two that stepped up to benefit a tremendous cause and put Infinite Hero Foundation on the sides of my racecar! 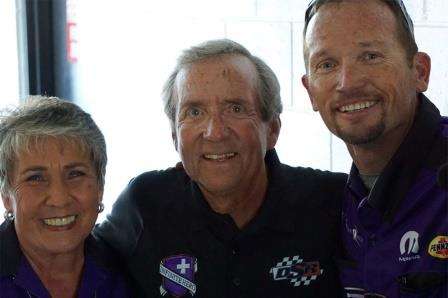