As they say in life, all good things must come to an end.

That is exactly how Jack Beckman is treating the remainder of the 2020 NHRA Mello Yello Drag Racing Series season as he learned just a few weeks ago that his time in the Infinite Hero Dodge Charger Funny Car for Don Schumacher Racing would be coming to an end at the conclusion of this season and, very well, could spell the end to his time in Funny Car.

Beckman is one of two DSR cars, alongside his teammate Tommy Johnson Jr., sponsored by Doug Chandler and his late wife Terry Chandler in the “giving cars.” The Chandlers personally funded both cars and, due to that generosity, the team was able to take on various charities as sponsors of the cars with all proceeds going to those institutions.

Since 2013, the Chandler family has been supporting NHRA and causes such as the Make-A-Wish Foundation, Infinite Hero Foundation and most recently the University of Texas MD Anderson Cancer Center. More than $730,000 has been raised through Chandler and DSR’s various Infinite Hero partnerships.

Now, that partnership will come to an end following the season after several successful years, and that leaves Beckman thankful, yet reflective, this weekend.

“It is likely our last year unless we find funding. Right now, it is not looking good for next year,” Beckman said. “But I am beyond grateful. They gave us six more years of employment here. They let us run strong and change the lives of some injured veterans. I could not be more proud and humbled by what we have been able to do.”

If this indeed Beckman’s final year in Funny Car, he couldn’t have scripted a better ending, winning this past weekend’s DENSO Spark Plugs U.S. Nationals – his second U.S. Nationals victory in the Infinite Hero Foundation machine.

“If this is the last time I have raced at Indy, that Infinite Hero Dodge Charger team left nothing on the race track,” Beckman said. “That is what drag racing is all about. Doug Chandler, thank you. Terry Chandler, what a wonderful six years. We collected a whole lot of Wally trophies and a whole lot of amazing fans. I hope I can keep doing this next year, but I will revel in this one. Our team was awesome today.” 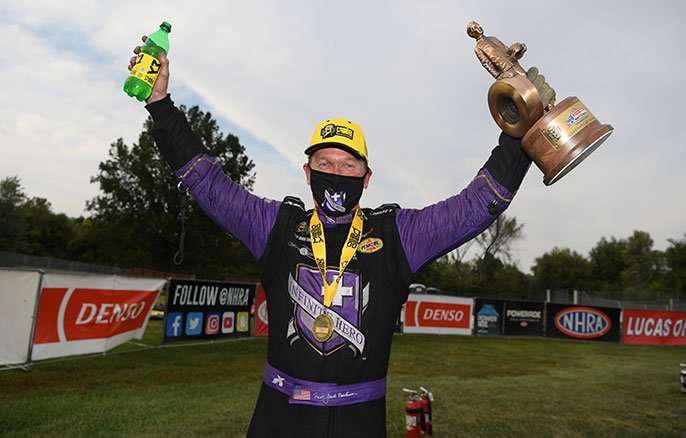