Add Jack Beckman’s name to the list of drivers who aren’t in favor of the revisions of NHRA’s Mello Yello Series Countdown to the Championship for the 2020 season. 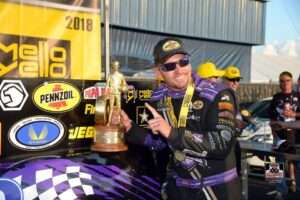 January 27, 2020 – Beckman, the 2012 NHRA nitro Funny Car world champion, who finished second in the points a year ago a mere eight points behind champion Robert Hight, doesn’t agree with what NHRA has done to the Countdown to the Championship criteria.

As in previous years, the top 10 drivers in each of the NHRA Mello Yello Drag Racing Series categories at the conclusion of the NHRA U.S. Nationals will earn positions in the Countdown to the Championship.

New for 2020, drivers in the Mello Yello Drag Racing Series who meet a minimum set of requirements will also earn their place in the playoffs.

In NHRA’s Top Fuel and Funny Car classes, drivers who compete at all 18 events in the regular season and run a minimum of two qualifying sessions at each event will also earn their place in the playoffs.

“What you’re doing is your taking a broken watch band-aiding pieces on it and taping a sundial on it instead of stepping back and saying, Wait a minute, is there a better way to tell time?,” Beckman said. “In this case, you need to throw out the baby with the bathwater. It was never a good format. It worked for NASCAR because they can go out there and go a lap down in a race and still go out the entire rest of the race and earn points. We can’t lose first round and get any more points that day. Our sport is not a playoff sport. We can’t sneak back up there for the second round, semifinals and finals after we have lost.”

Beckman, a veteran driver for Don Schumacher Racing, understands the Countdown to the Championship’s purpose for drag racing.

“I have said from the get-go, the Countdown has a huge overarching benefit for the sport,” Beckman said. “That’s create excitement later into the season. Championships have still been locked up before the final race under the Countdown format. I am a fan of doing it the old way. Drag racing is supposed to be about a season-long sport. Our sport doesn’t lend itself to a playoff format in any way shape or form. It would take me 10 minutes to articulate the different points why and I would debate anybody over that. There’s less overall car count right now and that likely is the reason for this decision. I understand this from the sanctioning body’s side of it, at the end of day we need to have a successful sport, so it works for the most amount of people. I get that. I just think there’s a better way to do it.” 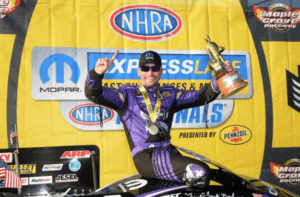 Although Beckman finished just eight points from tying and nine points from winning a title in 2019, he still doesn’t believe in the Countdown format.

“We wouldn’t have been close had it not been for the Countdown,” Beckman said. “We would have finished eight rounds out of it, if wasn’t for the Countdown and points-and-a-half at Pomona. So, you go “Oh my God, you came within less than a round of winning the championship. Yeah, that’s because Billy’s mom, told Billy to slow down a little bit so the race looked closer.”

Beckman did offer his suggestion to how to conduct the Countdown to the Championship.

“If you have to have a Countdown format race us until Indy, divide everybody’s points by two or divide them by three or divide them by six, I don’t care,” he said. “That way someone who has built a big lead would still enjoy a fraction of that. That way somebody in 10th hasn’t locked up a spot in the top 10 and still has to fight their butt of the rest of the year. That way the guy in 11th or 12th still has a potential shot of racing their way into the top 10 without being given welfare points.”

Unlike some other drivers, Beckman doesn’t see the new Countdown revisions as a token medal.

“At the end of the day, if a guy comes to all 18 races, I don’t think it is a participation trophy,” Beckman said. “Terry McMillen and Scott Palmer would be the perfect examples for this. They would still have a legitimate shot at racing into a top 10 spot, which would mean a huge deal in their search for sponsorship. Again, I can’t say this without saying to me, the critical error of the Countdown is the points reset and the line under No. 10. You don’t just yellow flag the top 10 cars and say that’s it, everybody else goes a lap down at this point even if you’re not. Race us until Indy and cut the points in half or by three, or by four or by 6.2, I don’t care. Race us until Indy and then have a multiplier on the points and bunch the points up, but still keep the proportion of lead that each car enjoyed over the position behind it.”

Beckman proved his point about the points being reset and lost in the case of reigning two-time Top Fuel world champion Steve Torrence in 2019.

By the way, I’m not for points-and-a-half at any race. It makes no sense. The fourth quarter of the Super Bowl is not points-and-half. The ninth inning of the World Series is not points-and-a-half. It makes a lot of sense from the standpoint of excitement for the championship being decided on Sunday at Pomona. I totally understand that. But you know what, life can’t always be scripted and manipulated to end up in a perfect 4-4 tie in the bottom of the ninth in Game 7. Life doesn’t work that way. Listen, if the team sweeps the first three games of the World Series, they don’t take anything away from that team going into Game 4. They could sweep it. Of course, Major League Baseball would love to see it go seven games, it is better for ratings and better for revenue. Of course, it would be awesome for the fans and the sanctioning body (NHRA) if the championship went down to the last day of the season, but we don’t need to manipulate a sport that has so much already to offer.”

After a highly-successful 2019 campaign that saw him win two races, Reading, Pa. and Pomona – both in the Countdown –  and five runner-up finishes, Beckman is amped for 2020’s season to begin. 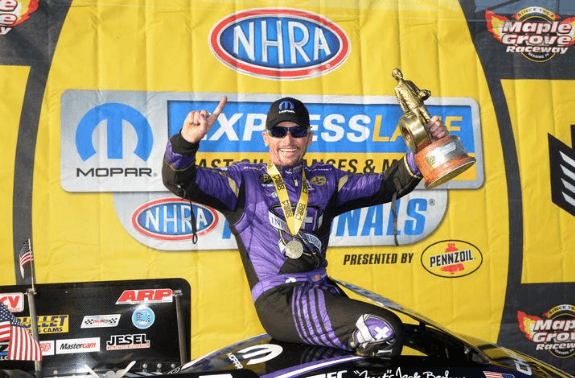