Jack Beckman and Matt Hagan both advanced to the Funny Car final round, and will battle it out for the trophy during the to-be-announced rescheduled date and time.

Race Recap:
In the first four races of 2020, ‘Fast’ Jack Beckman has been to the final round three times. He started the year with a win at the season-opener and went on to finish as the runner-up at the next event. On Sunday during the NHRA Summernationals at Indianapolis, Beckman advanced to the final round for the third time and was prepared to go head-to-head with DSR Dodge Hellcat teammate and last week’s winner, Matt Hagan, in the final round before Mother Nature threw a wrench in the plans and canceled the remainder of racing for the day.

Beckman’s march to the final, his fifth at Lucas Oil Raceway, began by defeating newbie Chad Green in round one to set up a meeting with Tim Wilkerson in round two. Against Wilkerson, Beckman’s slight starting line advantage coupled with a 3.991-second pass enabled him to get the win over his opponent’s competitive 4.009-second effort. The semifinals featured a match-up between Doug Chandler’s ‘giving cars’ with Beckman’s 3.969 E.T. besting teammate Tommy Johnson Jr.’s 4.027 E.T. By winning the round, Beckman not only earned a berth to the finals but moved back into the Funny Car point lead, a position he had given up to Johnson on Saturday due to Johnson’s strong qualifying performance. Beckman will battle it out with Hagan for the Summernationals Funny Car trophy when racing resumes at the NHRA. U.S. Nationals on Labor Day weekend.

Quotable:
“In a lot of ways these races will have a little asterisk next to them, what’s not going to be different is the trophy. It’s the exact same size as every other Wally we’ve earned. It’s going to mean just as much. We’re going to work just as hard for it. Whether we run tonight, tomorrow, or in three weeks it really doesn’t matter to me. We have a car and a team that can adjust. We struggled in qualifying and the team worked hard and figured it out. The car came around and we’re in another final round and someone is getting a trophy. I don’t care when they run it, we’re gonna run our tails off.”

*Denotes potential point total based on winning the to-be-contested Indy 2 final round. 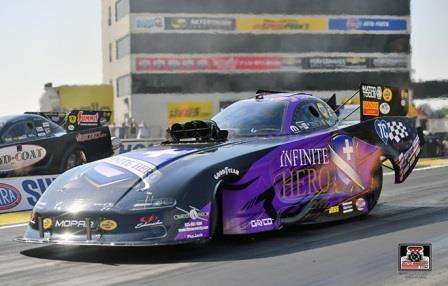