Noteworthy:
At the most recent event (Indy 2), Beckman and his teammate Matt Hagan advanced to the Funny Car final round before the race was postponed due to rain. The finals are rescheduled for the NHRA U.S. Nationals during Labor Day weekend.
As the current Funny Car point leader, Beckman is looking for his second triumph in 2020 after having raced to the Pomona win, and a runner-up finish in Phoenix. He has been to the final round in three out of the first four events of 2020
Has maintained the Funny Car point lead since the start of the 2020 season

Quotable:
“It’s odd, I kind of feel like a cross between Batman and Bill Murray in the movie Groundhog Day. We’re going back to Indy for the third time in a row, and it’s kind of like ‘wow I’ve seen this movie before.’ And the Batman part is, I feel like because the season and schedule has changed so many times, I’ve got my bag packed, I’ve got my airline ticket, and as soon as we get that ‘go sign,’ it’s time to head to the airport and get back out there. I’m thankful that we’re racing. I’m looking forward to being able to have more fans in the stands at this race, and I’m hopeful that not only can we bag our first Indy trophy of the year – because we’re also still in line for the final of the Indy 2 race which will take place later – but that we prove that the things we’ve just sorted out with our Infinite Hero Dodge are exactly what we needed to be back at the top of the heap.” 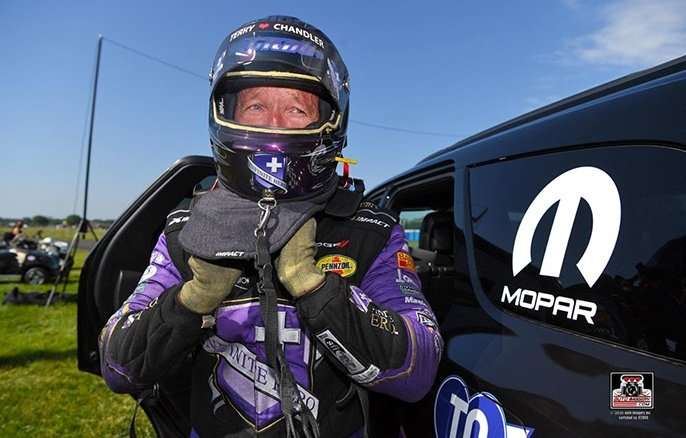