Race Recap:
For someone who has two wins in four final showdown appearances in 2020, Jack Beckman is a safe bet to pick for a long day of going deep into elimination rounds. He entered the weekend with the point lead, a position which he has maintained throughout five of the first six events of the season, and had his sights set on widening the margin between him and his teammates who have been hot on his heels all season. Beckman and the Infinite Hero Foundation Funny Car team struggled to make a clean pass during qualifying and started race day from the ninth position. In round one, Beckman had the starting line advantage and never trailed for the win over a tire-smoking Paul Lee. The quarterfinals found Beckman facing teammate and fellow championship contender Matt Hagan. Again, ‘Fast Jack’ was out of the gate first and held the lead until just before the big end when his car started to lose traction and Hagan was able to drive around for the win. Beckman remains the point leader heading into the next event in St. Louis.

While Beckman’s race day may have been cut short, his fight to raise funds for the Infinite Hero Foundation’s Task Force 22 campaign is still going strong. From now through the end of the month, Beckman has various items up-for-grabs to help raise money for the mental health and suicide prevention programming for our nation’s veterans. The former U.S. Air Force sergeant has donated a custom helmet as well as a Zoom call, among other prizes. To bid: https://www.infinitehero.org/task-force-22/

Quotable:
“If I had one do-over so far this year, I’d like to race that one (E2) again. We both knew we had to push hard against each other. I think Hagan’s car did something weird in the bell housing and it didn’t run what they were anticipating. Ours was just a handful. We were pushing hard. I’m going to have to be smoother with my steering because when the car is accelerating that hard, it’s on the razor’s edge of breaking loose and I don’t think I helped it by trying to keep it in the groove and making a lot of corrections. I think our 3.92 first-round shows people that we’re capable of running as good or better than anyone out here. We’ll head on to St. Louis next week and we have another shot at a trophy. There are four more opportunities and 16 rounds left this year; we just have to be incredibly greedy for the rest of the season. The big throw-down cars are probably ours and Dickie (Venables) and Matt’s (Hagan) cars. But don’t write off NAPA and Rahn (Tobler) and TJ’s (Tommy Johnson) also. They have a lot of poles and obviously, a ton of other cars are really good. (Tim) Wilkerson is back in the thick of things and J.R. Todd raced us in the final at Indy. I’m looking forward to St. Louis. That’s going to be a stout weekend.” 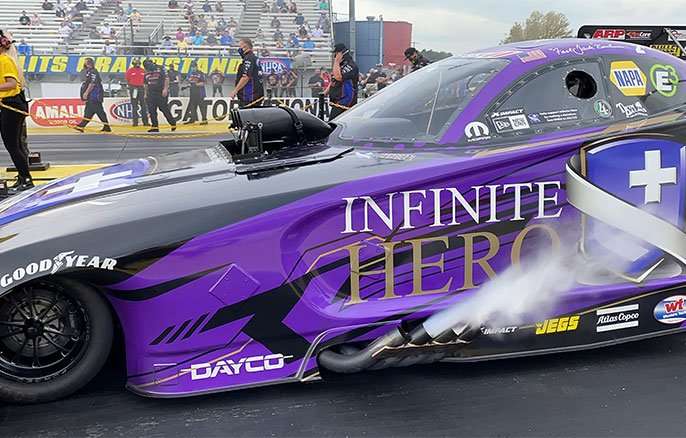