Note:
On Saturday, just prior to nitro Q1, Richard Carson, Army Combat Medic (retired), was presented with an iBOT personal mobility device. The iBOT donation was made possible thanks to Doug Chandler and the TLC Foundation, the Parasol Foundation, and the incredible fans who generously support the Infinite Hero Foundation. An image of the presentation is included below, immediately following the qualifying results.

Beckman clinched the No. 1 spot when he drove the Infinite Hero Foundation Dodge Charger SRT Hellcat to a blistering 3.884 at 328.14-mph pass during Saturday’s second and final qualifying session at Houston Raceway Park. The 2012 Funny Car world champ and his Dean Antonelli/John Medlen-led team were the only ones to dip into the ‘sub-3.9-second’ range throughout Funny Car qualifying.

Beckman, who is currently locked-into a fierce four-way intramural battle for the 2020 Funny Car title, entered the weekend with only a four-point deficit separating him from his No. 1 ranked teammate, Matt Hagan. Hagan extended his lead by three points when he powered his Pennzoil Dodge to the provisional No. 1 spot in Q1, but Beckman was able to tighten the margin back up when he rocketed to the top of the Funny Car field during Q2. In addition to jockeying for the No. 1 and 2 qualifying positions, Beckman and Hagan have also been swapping the No. 1 and 2 spots in the point standings for the past five events, and by earning the Baytown pole, Beckman ensured the drama will continue to heat-up heading into race day. For his strong qualifying efforts, Beckman has been “rewarded” with a challenging match-up with DSR Dodge teammate Ron Capps in round one of eliminations. DSR cars are always a tough draw, but add in the fact that every Funny Car victory over the last 12 events has been captured by a DSR Dodge driver, with Capps claiming two so far in 2020, and Beckman knows he and his team will have their work cut out for them as they attempt to pick up their fourth win of the year on Sunday.

“If we beat four people tomorrow, they’ll hand us another trophy. I didn’t ever think, with 17 cars here, that (Ron) Capps would be the No. 16 qualifier but, I’m happy,” explained Beckman, who became DSR’s top trophy-earner of the season when he ousted Hagan in the final round last week. “We know we are going to have to earn this championship. I’d rather take it from the No. 1 spot because Matt (Hagan) had a four-point lead coming in. He stretched that out Q1 and now we tightened that back up a little bit.”

With his sights set on picking up his first Houston triumph on Sunday, Beckman knows that not only will a win put him one step closer of achieving his ultimate goal of delivering the 2020 Funny Car championship trophy to team sponsor Doug Chandler, but it will also extend DSR’s undefeated Funny Car streak to 13 consecutive events, an accomplishment that dates back to October 2019 when Hagan kicked it off in Dallas.

“The streak of the Don Schumacher Racing cars is awesome, but it’s also ulcer-inducing because it’s always one of our cars next to us when we go to the late rounds, or in tomorrow’s case, round one,” added Beckman. “Four win lights tomorrow is what we need.”

The Competition: No. 16 Ron Capps 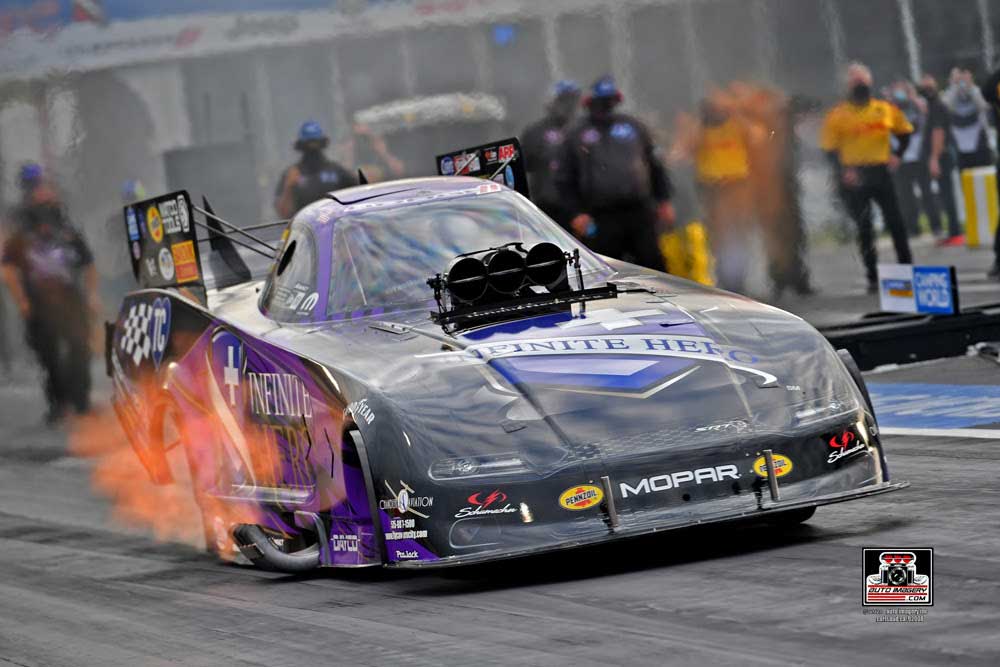