Race Recap:
Starting from the fifth seed, Jack Beckman, a two-time 2020 event champion, kicked off his race day by speeding through the 1,000-foot timers in 3.885 seconds at 332.10 mph to clock low E.T. of round one and trailer his first opponent, Blake Alexander. Beckman then faced Dan Wilkerson in the second round and used the quickest run of the quarterfinals at 3.890 seconds to capture the victory. The round win set up a semifinal match between Doug Chandler’s ‘giving cars’ with Beckman set to square off against teammate Tommy Johnson Jr. Aboard the Infinite Hero Foundation Dodge, Beckman made another stellar sub-four-second run, but his 3.903 E.T. couldn’t keep pace with Johnson’s 3.896-second pass, ending Beckman’s day.

After carrying the Funny Car point lead throughout six of the first seven events, Beckman ceded the top spot to teammate Matt Hagan on Sunday. Beckman occupies the No. 2 spot on the leaderboard and trails Hagan by 16 points.

Quotable:
“It’s not the way I thought the day would end. I really thought we had the car to beat. Guido (Dean Antonelli) and (John) Medlen tuned perfect for today’s conditions. We were low E.T., low E.T. and in the semis second-low E.T. The problem was the car we pulled up next to, Tommy Johnson, was low E.T. The silver lining is a DSR Dodge Funny Car wins for the 11th straight race for Don Schumacher. The upside for us is that we have three more chances to get trophies and the way our car is performing I wouldn’t put it past us.” 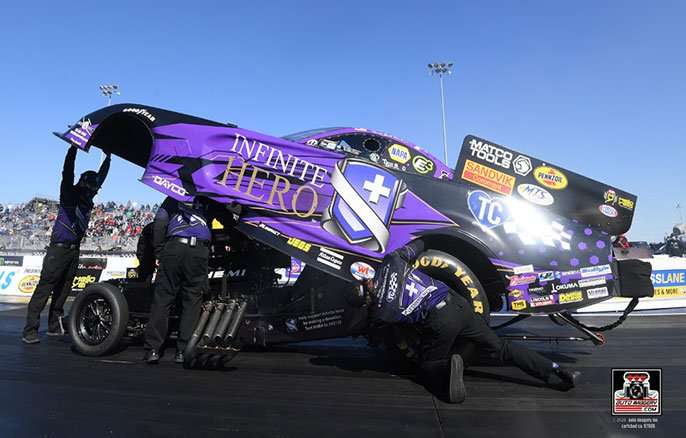