MOHNTON, Pa. (September 15, 2019) – The thrill of victory has been within his grasp several times in 2019, but Sunday in the final round of the 35th annual MOPAR Express Lane NHRA Nationals Presented by Pennzoil at Maple Grove Raceway near Reading, Pa., Jack Beckman seized the opportunity and registered his first Funny Car victory of 2019.

Two weeks after coming up agonizingly close to victory in the final regular season event of 2019 near Indianapolis, the driver of Doug Chandler’s Infinite Hero Foundation Dodge Charger SRT Hellcat Funny Car was not going to be denied in the critical first event of the six-race Countdown to the Championship playoff series. Beckman defeated John Force in the final and captured his third career victory at Maple Grove and 29th of his career, and by doing so took over the points lead in the Countdown standings. 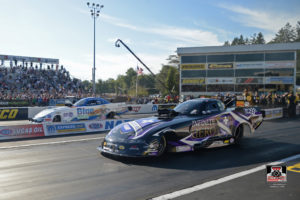 “Fans come up and say ‘are you going to win this weekend?’ and I say yes. Every single race I say ‘yes’ because there’s no reason to think we can’t win,” explained Beckman of his previous four runner-up finishes in 2019. “We’ve got the tools, we’ve got the parts, we’ve got the people, and I’ve been wrong eighteen times this year. And then you don’t know, when you’re down to just six races left and you look at the caliber of cars out here, you don’t know if you’re going to be able to win a race. I know we have a car capable of winning a race, I know if I drive up to my potential we have a driver capable of winning a race, and sometimes it’s just trying to find both of those on the same day.”

Beckman’s path to victory started from the third position following consistent qualifying runs in sessions three and four. The 2012 Funny Car world champion rolled past Jim Campbell with a 3.908 E.T., the second-quickest run of the first round and race day. Beckman then squared off with former champion Robert Hight, who led the points coming into the Countdown, and delivered another solid pass while Hight smoked the tires at the hit of the throttle. In the semifinal, the results were the same with crew chiefs Dean Antonelli and John Medlen tuning Beckman’s machine to another clean and consistent pass while his opponent, J.R. Todd, lost traction and coasted to the finish.

In his 61st career final, Beckman battled Force for the eighth time in the finals, and first at Reading. He wasted little time by rolling in quickly and used quick reflexes to post a .028 reaction time versus a .068 light for Force. Beckman’s light was the difference with his 3.958 seconds at 330.07 mph pass turning on the win light over Force’s run of 3.952 seconds to give him a holeshot victory and his first triumph piloting a Dodge Charger SRT with the Hellcat body.

“To win on a great side-by-side race, and to do it on a holeshot, that’s just awesome,” said Beckman. “If you’re going to win a race, the way to do it is a close side-by-side one like John and I had in the final.

“Winning this one is extra special for a few reasons: it’s our first win in the SRT Hellcat, all of our teammates have already done that, we took over the points lead, and it’s been way too long since we’ve been to the winner’s circle. For a shot in the arm, for a psychological boost, for that mental edge, that intangible that I think you need to be able to win a championship, this might be the thing that is the first step for us.”