Back On The Road Again

08.27.19 El Camino Update – Well, I suppose it would just be easiest to plead, “Guilty as charged” regarding getting wildly carried away with my vehicle. I just reread the article that I penned back in March, 2016 (shortly after retrieving the Elco from three years in storage), and it’s fair to say that I radically underestimated the time it should take to get the car back on the street.

And I have zero regrets!

You see, to me the beauty of hot-rodding truly comes from the philosophy that projects evolve, not just from the standpoint of the vehicle, but more from a personal desire to chase what likely will never come to fruition: the “perfect car”.

Make no mistake; the El Camino looks wonderful, and I’m beyond proud of how it turned out. But the real beauty of hot-rodding comes from the journey as much as – and probably more than – the destination. It’s very easy to put a price tag on my car (I had to do it for insurance purposes). But the true value transcends any dollar signs, numerals, or decimal places.

I spent plenty of money on this project, more than I initially thought I would (by a factor of two or three!). But I don’t believe that I wasted a dime (unless you count all that extra hardware in my nut and bolt collection now!). I think I can say with a high degree of confidence that I was able to do what virtually NOBODY who builds a hotrod ever accomplishes: invest less money than the actual increase in value to the car.

For purposes of clarity, this would have to assume that my time has no monetary worth?but doesn’t that apply to any of us crafting our dream ride?! After all, how do you monetize that period from January 25, 2016 (the day I borrowed the flatbed truck from the NHRA Museum {after we had used it to take my Blackbird dragster there} and brought the Elco home), until April 10, 2019 (when the car actually hit the road for the first time since 1997). Subtract eight months while Neil Ramey was applying his paint magic up in Idaho (and, yes, that definitely was an extreme example of getting carried away. It also is the most stunning part of the car); take away the hundreds of hours of staring at sections of the car while planning the best execution; all the time on the internet researching, ordering, and watching videos to educate myself; hundreds and hundreds of miles (and hours) driving to drop off, pick up, and exchange parts and you still end up with, I would estimate, 1200-plus hours of hands-on time.

It would be disingenuous to suggest that I loved every minute of the build. There were plenty of times that I was beyond frustrated, along with lots of murmuring under my breath when things didn’t go smoothly. There were backorders, flaky vendors, unkept promises, and times I wondered why I decided to tackle this car, again. But, there also was unbelievable support from so many great companies (see the sponsor banner – these people helped make it happen!), and so many friends. Brian and Bruce from Finish Line Flooring kinda started it all off with the garage floor paint. From Carson Lev, who helped steer the direction of the entire build, to Mike Thompson, who always had the right equipment to fix something and get me out of trouble. Randy Haapala came over to lend a hand and give great advice far more times than any reasonable person should have to. Brian Thatcher, who is every bit as picky as me, always jumped in to assist, as did neighbor Dano, and my Kiwi buddy Robert. Joe Pando answered his phone at every hour of the day (and every day of the week) to guide me through all my fuel injection questions. Steve Williams, and Bob and George Vrbancic got me going on engine stuff, and Kevin McClelland became my phone-a-friend for all things BBC. Bob Lambeck dialed me in on his dyno. Paul Stoll became an MVP when he took care of the paint touch-ups needed after I messed up a couple areas and thought my world had ended. The gang at Eddie Motorsports couldn’t have been more helpful.

As I write this, I realize the terrible risk I am taking of leaving someone valuable without the accolades they deserve. Every company that I list in the sponsor section includes at least one person who went above and beyond to help make this happen. It’s hard to simply say, “thank you” to these folks and hope that it conveys how appreciative I truly am. Carson brought John Hotchkis over to the house to look at a car that hadn’t run for more than 20 years, and John took a leap of faith and donated the parts that would elevate the entire quality of the project. Scott at BMRS had a solution to all my questions, Jimmy at RaceTrans has gone above and beyond on numerous occasions, Bill Fowler has given me an education on everything related to brakes, and Jack Mattsen didn’t build me a radiator, he built me a functioning piece of art.

After three years of daydreaming, toiling, planning, executing, redoing, and interrupting this process more than 75 times to hop on an airplane for work, the time finally came to put the key in the ignition and see if I did everything correctly. It was April 2nd (I’m not superstitious at all, but I certainly didn’t rush myself and make the first attempt on April Fool’s Day!), and I did have to correct a few, small, self-inflicted issues. All things considered, everything went very smoothly.

Yes, the fuel pump block-off plate (the brand new one I bought just because the old one was 30 years old and I didn’t like the color) leaked enough to make a nice mess when the fans blew the vapor on to the header. I’m also struggling to get the feel that I want with the brakes. I converted the car to full manual (more for aesthetics than anything else), and I’ve spent many hours (and continue to do so) in an effort to realize the full potential of the Baer system.

My point is, a true hotrod never is quite “done”. In my case, Jimmy G. and I will install a 700R4 overdrive transmission, with a lockup converter, in the near future. This has always been part of the plan, and I’m excited to make the car friendlier on the highway, and a bit quicker in the quarter mile.

When I penned the initial article over three years ago, I mentioned the vision I had was to be able to cruise it to Bob’s Big Boy on occasion, and perhaps a trip or two to the dragstrip.

Even though the finished product is orders of magnitude nicer than I imagined back then, I won’t fall into that chasm of “trailer queen” show cars.

I’ve already run the car, on street tires, at the track to get a performance baseline before the trans swap.
I made a 140-mile round trip out to Bob’s in Burbank for their Friday cruise night (and even had dinner with Tommy Ivo!). This took place on June 28, my 53rd birthday.

That trip also afforded me an opportunity I wondered about, hoped for, but didn’t seriously think I could make happen. If you go back and read the first line of my column from May of 2016, I make a reference to the original owner of the car, George Pizzillo. I’d never met him, and I don’t think my dad has seen him for nearly 40 years. With the help of the internet I not only located George, but he was more than willing to drive out to Bob’s and take a picture sitting in the very same car (in the original seat!) that he took possession of 51 years and one day before, on June 27th, 1968.

I’m not sure I could possibly top that event in the remainder of time that I own this car. I’m hoping my dad can make the trip out here from Texas in the near future, as having him drive the car that he bought back in December of 1979 (and hasn’t driven for 38 years!) should be special.

One more item that ranks right up there in my history with this special automobile: Hot Rod Magazine will be doing a photo shoot in the near future.

I’d like to be able to continue to entertain those of you who stuck with me throughout this build, and show you the continuous updates, upgrades, and “up-days” that surely will surround my pride and joy.

So, like I’ve said since the beginning of this resurrection, stay tuned! 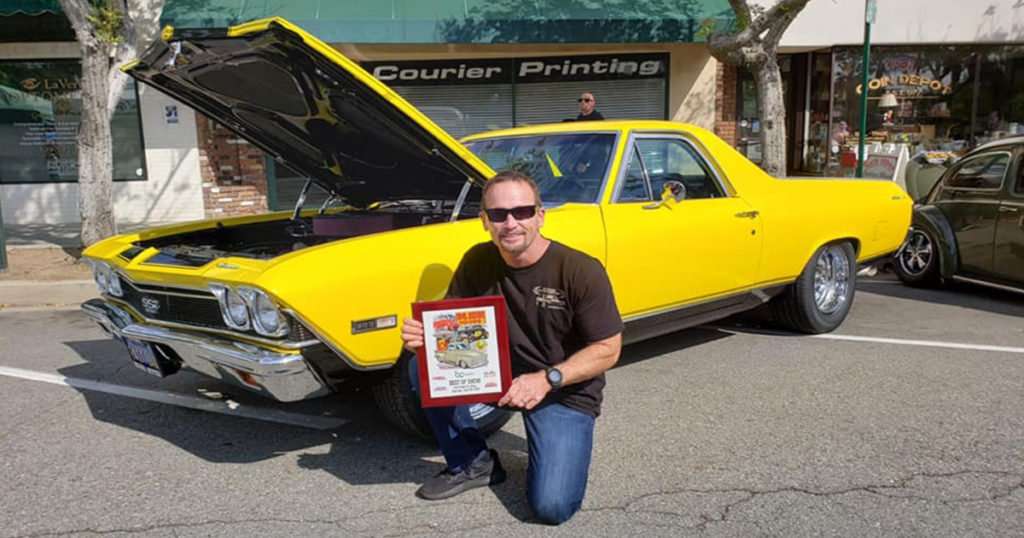 CLICK BUTTON BELOW TO VIEW THE BACK ON THE ROAD AGAIN PHOTO GALLERY.

Once you are in the gallery, click on the 1st picture, click the “i” in the top right corner and follow the progress notes on each picture.

Jack uses and endorses products and services from the following companies.