Beckman, the 2015 U.S. Nationals winner, defeated two-time Indy winner J.R. Todd in the final round, 3.90 to 3.96. It was Don Schumacher Racing’s ninth straight victory in the tour stretching back to last year’s October event in Dallas.

After qualifying the Infinite Hero Dodge seventh with a 3.94, tuners Dean Antonelli and John Medlen tuned Beckman to a better-still 3.90 in round one to defeat past U.S. Nationals champ Cruz Pedregon but dodged a bit of a bullet in the second frame when their purple Dodge slowed to a 4.00; fortunately for them, their teammate, Ron Capps, who won the Dodge NHRA Indy Nationals here three weeks ago, started to haze the tires and slowed to a 5.45 in the NAPA Auto Parts Dodge.

Beckman, winner earlier this year at the season-opening Winternationals, had reassumed the points lead in round one expand it by beating Capps and then added more tallies to his ledger by beating former Indy winner Tim Wilkerson on a semifinal holeshot. 3.915 to 3.914.

Todd has begun to show Don Prudhomme-like ownership of Funny Car at Indy with his third Indy in the last four years, but fell just shy of a third win.

The driver of the Jon Oberhofer- and Todd Smith-tuned DHL Toyota came out of the tough No. 8 spot after a 3.97 qualifying best. After beating Blake Alexander in round one with a strong 3.91, he should have been facing low qualifier Tommy Johnson Jr. in the second round, but Johnson had been upset in the opening stanza by privateer Dale Creasy Jr. And although Creasy posted a career-best 4.000 against Todd, he was no match for Todd’s second straight 3.91.

In the semifinals, Saturday’s Summernationals winner Matt Hagan got the jump on Todd at the green and was leading until his Hellcat Redeye Didge began to haze the tires, allowing Todd’s yellow hot rod to slip by for a 3.94 to 4.13 win. 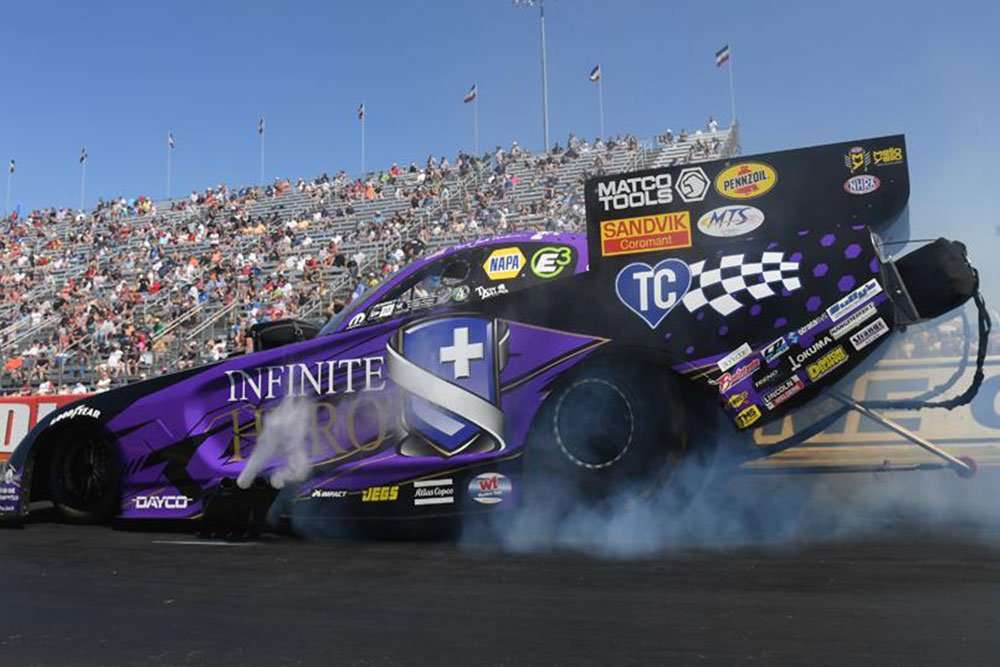