BROWNSBURG, Ind. (November 12, 2019) (EXCERPT) – Champions will be crowned this weekend at Auto Club Raceway at Pomona, and as the No. 2 and No. 3 ranked drivers in the NHRA Mello Yello Countdown to the Championship Funny Car standings, Jack Beckman and Matt Hagan’s 2019 title hopes are alive and well heading into the final event of the season.

As a front-runner throughout this year’s Countdown playoff battle, Beckman has amassed 2,448 points and trails leader Robert Hight by 46 points. In contrast, Hagan’s Countdown run got off to a rocky start, but after a tremendous comeback, which included consecutive wins, he now sits 56 points out of first. With the points-and-a-half format at play this weekend at the Auto Club NHRA Finals, both former world champions are within two rounds of potentially finishing the year as the 2019 NHRA Mello Yello Funny Car world champion, and both are confident in their team’s abilities to capture championship title No. 18 for Don Schumacher Racing, the winningest team in NHRA history.

Jack Beckman, Driver of the Infinite Hero Foundation Dodge Charger SRT Hellcat
Doug Chandler’s Infinite Hero Foundation Dodge Charger SRT Hellcat Funny Car team, led by crew chiefs Dean “Guido” Antonelli and John Medlen, has been a top challenger throughout the majority of 2019. By the conclusion of the NHRA’s ‘regular season’ in Indianapolis, Beckman had been to the final round four times, and capped off the last event with a No. 1 qualifier, but had yet to visit the winner’s circle.

In NHRA Mello Yello Championship Drag Racing, a common theme among drivers is ‘peaking at the right time,’ and by starting his 2019 Countdown campaign with a victory at the MOPAR Express Lane NHRA Nationals Presented by Pennzoil in Reading, Pa., Beckman did just that, catapulting himself from fourth into the Funny Car points lead. After securing his first Wally trophy of the season, Beckman suffered a first-round loss in St. Louis but quickly rebounded with a pole and runner-up finish at the next event in Charlotte, N.C. He continued his stronghold on the Funny Car category when he reset The Strip at Las Vegas Motor Speedway’s speed record and Funny Car E.T. record before posting a semifinal finish at the season’s penultimate event. The Southern California native has occupied the No. 2 spot in the Funny Car rankings throughout the last three races.

Quotable:
How does the added pressure of knowing your 2019 championship hopes are at stake affect you heading into Pomona versus a ‘normal’ race weekend?

“It’s pretty much business as usual for me. I’ve been keeping busy with my family, cleaning up in the garage, mailing stuff out to fans. I had a week where I almost didn’t have to think about getting strapped into a race car. Now that being said, I’ve got a ton of things that I’m responsible for at Pomona. I am participating in four different events, two Friday and two Saturday, and I’m emceeing two of them, so I’ve got to do some research, do interviews, be on the phone, make a trip up to Glendora before the race weekend, and that’s not a bad thing. It keeps me occupied, keeps me focused on something aside from the pressure of the championship.”

“I’m not sure that I could ever top the first Funny Car championship I won, just like I’m not sure I could ever top the first Super Comp championship I won. The first is always going to be incredibly special and significant. That being said, to go six more years and come close a couple of times and not the seal the deal makes you realize exactly how tough it is to win a championship. When (John) Force was winning all of those championships in the late 1990s/early 2000s, even he’ll tell you he kind of took it for granted for a little while. It seemed easy to do. Well, I am firmly aware of how incredibly difficult it is to do, and to do it with the Infinite Hero cause on the side of the car would be special for so many extra reasons there. A second Funny Car championship would mean the world to me.”

When you won in 2012, you had been ranked No. 1 for the two races leading up to Pomona. How is your strategy any different when you enter the race chasing the point leader, rather than occupying the No. 1 spot?

“As far as things go when we get into Pomona, we have to do our best to optimize points starting with Q1. I think we’ve got a car that’s clearly capable of doing that. We’ve been No. 1 qualifier three times in the last six events. I think right now we’re clearly a front-runner to contend for the championship, not just in our points position, but in our performance lately. So, my job is to do my job. If we get another opportunity like we had in Vegas where we are paired up with (Robert) Hight early, we get a chance to control our own destiny. If we win the race and Robert is not in the final next to us, we win the championship. I’m not looking at Matt (Hagan) or John Force behind us because we want to finish first; we’re not trying to defend the second-place position. So, our goal right now is to maximize qualifying points, execute perfectly on race day, and hope that the ladder falls in such a way that we pair up with Robert before the final round.”

Don Schumacher Racing, By the Numbers 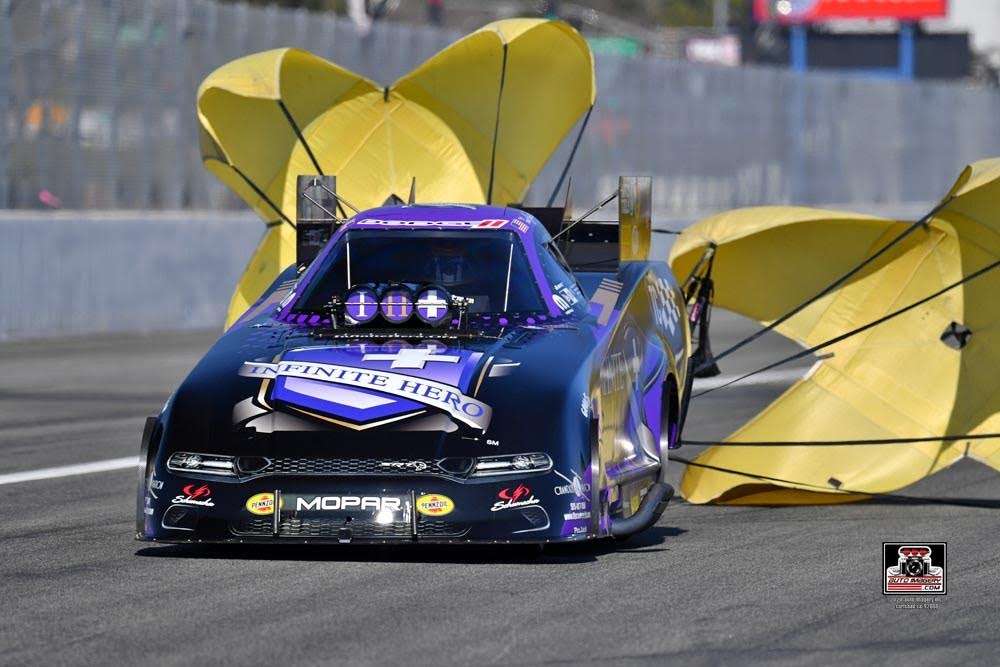